Editor’s note: John Gong is a professor at the University of International Business and Economics and a research fellow at the China Academy of Open Economy Studies at UIBE. The article reflects the views of the author and not necessarily those of CGTN.

Industrial policy and state subsidies are at the center of the US indictment of China’s supposedly mercantilist and predatory economic behavior in what is described as the state-led model of national capitalism. For example, about half the pages of former US Trade Representative (USTR) Robert Lighthizer’s Section 301 report against China are related to the latter.

“China is an exception when it comes to global norms and rules governing trade, investment and economic policy, and which the relentless and even accelerated behavior of ‘commercialism of innovation’ on the part of the Chinese government represents a threat not just to the U.S. economy, particularly its cutting-edge industries, but indeed to the entire global economic and trading system,” read the opening statement of a report by ITIF (Information Technology and Innovation Foundation) as early as 2017. ITIF is an influential Washington DC-based think tank that provided the bulk of the theoretical and spiritual inspirations for former US President Donald Trump’s trade war with China.

But now Washington is poised to do exactly what it accused China of doing, to do it with broad political consensus with both aisles of Congress firmly behind it, and to do it on a scale that eclipses what the Chinese government had done so far. The House is expected next week to consider the America Competes Act, a $250 billion bill as a way to strengthen technology, manufacturing and research in the United States. The Senate already passed a similar bill last year for more or less the same amount.

Among other things in the bill is the $52 billion federal subsidy directly to build factories to produce semiconductor chips. Now it’s federal money on top of state-provided incentives, for example, in Arizona also involving tens of billions of dollars, where Intel has pledged to build new semiconductor factories. 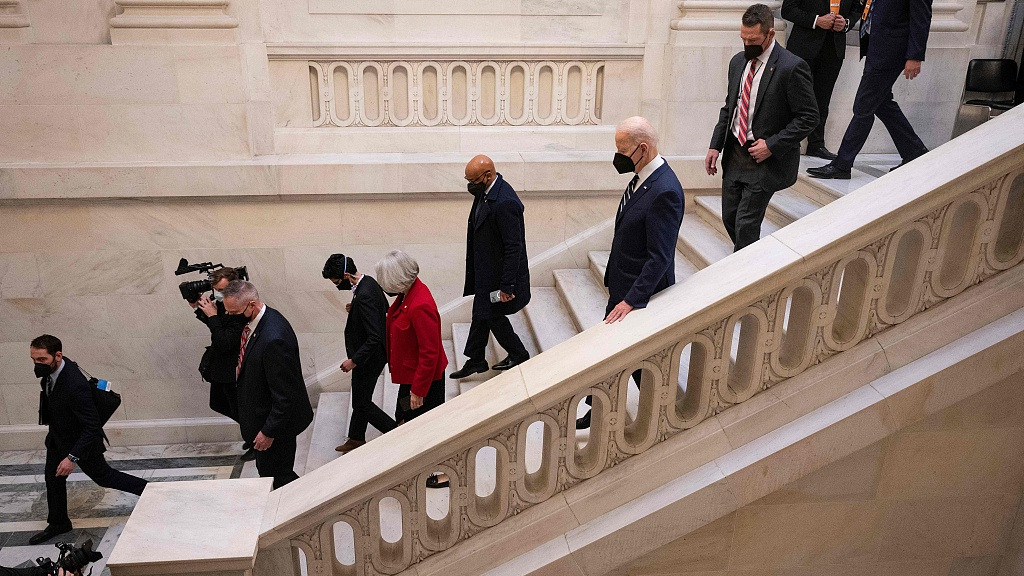 US President Joe Biden walks down the stairs of the Russell Senate Office Building after a meeting with the Senate Democratic Caucus in Washington, DC on January 13, 2022. /VCG

US President Joe Biden walks down the stairs of the Russell Senate Office Building after a meeting with the Senate Democratic Caucus in Washington, DC on January 13, 2022. /VCG

Now, if that isn’t industrial policy and state subsidies, I don’t know what else it could be.

It’s ironic but also amusing that Washington seems to shamelessly emulate Beijing, apart from the fact that it’s probably doing so even on a much larger scale, while accusing the latter of breaking global norms and rules. But the truth is that industrial policy and state subsidies is something Washington has always done, just not as ostensibly as it does now, for example in projects from the Defense Advanced Research Projects Agency (DARPA) program, to the National Institute of Health program, and others. Today, Washington not only funds research and development, but it also directly funds manufacturing, and it does so legislatively.

Even leaving aside the question of whether the two new bills in Congress qualify as mercantilist and predatory practices, it is indeed legitimate to wonder whether this legislative initiative would constitute a violation of the Agreement on Subsidies and countervailing measures at the WTO.

I think there is no clear answer to this complicated question, but it is precisely the kind of problem that needs to be solved in the framework of the reform of the WTO, but also bilaterally in the trade negotiations between Beijing and Washington. For now, at the very least, Washington should just stop the warning rhetoric against China about something it is also doing.

(If you want to contribute and have specific expertise, contact us at [email protected])

World powers must form climate alliances for the planet

Credits Nathan Gardels is the editor of Noema Magazine. A breakup opens a new space in place of the broken status quo. It dispels illusions about an old order no longer fit for its purpose and makes room for what was smoldering to emerge in a clearer form. Above all, a break with the past […]

Seminar on “The New Economic Policy Beyond 50: Retiring or Refreshing?

At this seminar, Dr. Lee Hwok-Aun shared his study of Malaysia’s new economic policy and argued that Malaysia could start from scratch by building on the two strands of the NEP with resets and key updates based on enduring principles and systematic policy design. MALAYSIA CURRICULUM SEMINAR Tuesday, May 17, 2022 – ISEAS Institute – […]

In a region that has seen the emergence over the years of multiple forums and agreements with an economic dimension – ASEAN, ASEM, APEC, RCEP, TPPA, CPTPP – the Indo-Pacific Economic Framework for Prosperity (IPEF) could easily join, as one Tweeter Put it, this Asian alphabet soup. The question is whether the IPEF, launched in […]